Fans can be divided in several ways: by place of installation, e.g.: in line, wall mounted, ceiling mounted; by application, e.g. for kitchen canopies, chemical resistant, desmoking; by fan construction, e.g.: axial, radial. The present article will present the most important features of in-line duct fans as well as axial, wall mounted fans.

In-line duct fans are used to transport air via ventilation ducts. Depending on construction and body type, they can have different parameters. The variety of products available on the market allows carrying out almost any project using ready-made solutions by different manufacturers. In-line duct fans can be divided by fan construction into axial and radial fans.

In axial fans, the largest share of the energy in the transported gas is the kinetic component, which translates to high air loss but results in low compression of the medium. To enhance the compression value, some manufacturers offer countercurrent axial fans. These stand for two fans rotating in opposite directions, with separate drives in a shared body. Due to the fact that the drive is located inside the gas flow, axial ventilators are intended for transporting air with low dusting and moderate temperature. 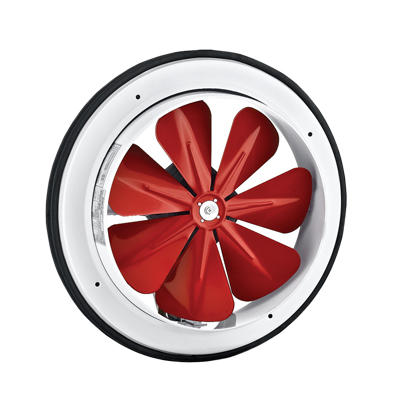 Illustration 1
An example of inline duct ventilator with axial fan

The second type of in-line duct ventilators are radial fans. Compared to ventilators with axial fans, they offer much higher compression at similar capacities. This allows them to be used in long, branching ventilation installations. Their disadvantages include a more complex construction which results in a higher price.

Illustration 2
An example of a radial fan

The devices can also be divided by the ventilation duct connection method. Here we can find ventilators for round and square ducts. Both the casing and the fans intended for round ducts can be made of steel and plastic, depending on the device application. Plastic construction usually features lower resistance to in-duct pressure compared to steel versions. Devices intended for installation in square ducts are usually steel.

In versions for square ducts, manufacturers offer models with engines inside and outside the duct. The placement of the electrical engine outside the jet of air flow allows transporting contaminated or hot medium. An advantage of the version intended for square ducts is good access to the actual fan. It is installed on an openable hatch which allows easy access without dismantling the duct. 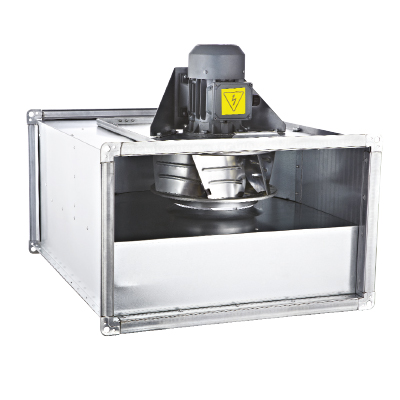 Ventilators with “box” type casing are also popular. It allows dismantling individual sides of the casing to direct the airflow according to the requirements. Side panels can be fitted with both acoustic and thermal insulation. The possible applications for the above-mentioned ventilators are very diverse. They can transport the air in air conditioning systems within the building, to transport contaminated media in industrial facilities, draw the air out of the kitchen, desmoke the room during a fire or operate in explosion hazard zones if explosion proofed.

Wall mounted axial ventilators are installed directly on walls and are used for general ventilation of industrial facilities, garages or warehouses. No ventilation duct lends itself to low air resistance which allows recovering losses in the transported media at very low compression. It means that the rotation speed of the fan can be comparatively low, limiting the amount of noise generated by the device.