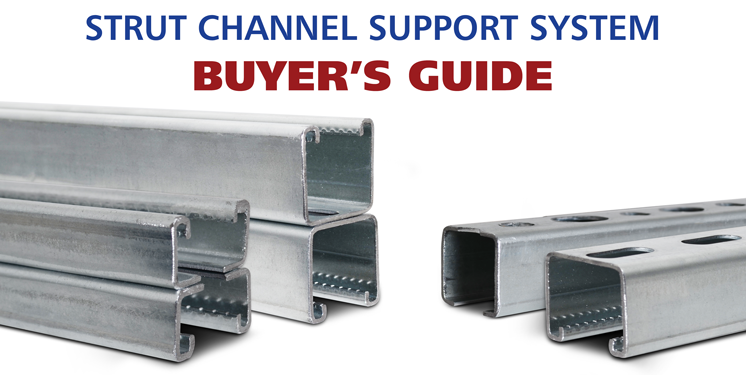 What is a steel strut?

What is strut channel used for?

The basic component of the support strut system is STRUT channel, which is a slotted steel mounting rail used for making steel frames and fixtures. In our offer, it's available in electro-galvanized coating - LDBST or hot-dip galvanized coating - LDBSO, as well as a back-to-back (double) channel - LDBDT.
STRUT channels are the basic component of the STRUT channel support system to be utilized not only in ventilation, air conditioning and cooling systems but also for other components that are to be suspended. The serrated inturned edges for better hold between a channel and a nut, these serrated "teeth" are compatible to sliding nuts' grooves: SNP, SNL and SNKL - which together with fasteners, beam clamps and channel brackets form the complete support system for the installation of air conditioning and ventilation system. 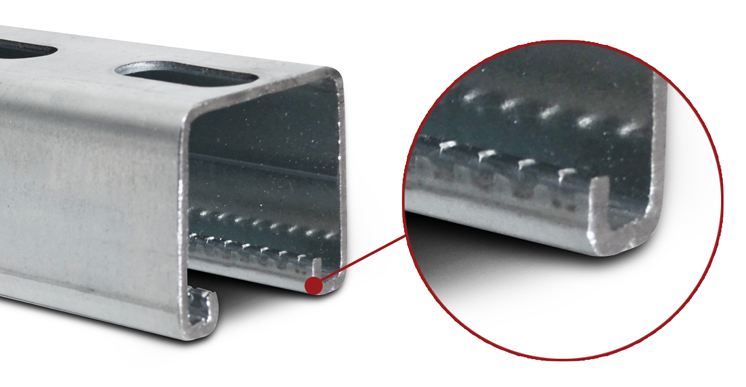 How to order strut channel

First things first, when selecting channel manufactures or distributor You need to make sure that the chosen product meets national requirements and technical standards, as well as specific project technical requirements. Our STRUT channel system was tested and received a positive assessment of performance in the form of National Technical Assessment ITB-KOT-2019/0940 - more information. Then, we can focus on product characteristics, namely:

Our strut channel is manufactured from galvanized steel sheet (carbon steel) as a standard, yet on special request, we also offer stainless steel channels.

In stock, we have support channels in 2-meter, 3-meter and 6-meter long sections, yet we also provide custom cutting services.

The alternative for LDBST strut channels for light-duty applications can be LDB fixing rails. There's available in the following sizes (width x height): 30x20mm, 30x30mm, 30x45mm, 41x21-mm and 41x41mm. The difference between LDBST and LDB mounting rails are sizes, thicknesses and hole pattern as well as serrated, inturned edges ("teeth") that only LDBST support channels are equipped with.

Apart from the C-profile, the support system consists of a broad selection of connectors, angle plates, clamps along with nuts, hole plugs and supports.

Channel brackets also known as fittings are used to connect strut channel sections together in a variety of configurations, creating a multitude of different structures.

Flat channel connector is used to create and support the structure of the strut channel. Flat channel washers - LDB-P-1 - are most often used with threaded rods and hex nuts as a ceiling suspension and to secure the object to the strut channel. Flat steel coupling LDB-P-41-2 is especially useful for connecting two straight sections of the strut channel. If required, flat channel brackets - LDB-P-41 - are available in different lengths and number of holes variant, which is indicated in the product code, i.e. LDB-P-41-no. of holes. The higher the load and length of the entire connected rail section, the longer channels plates should be used.

90-degree angle bracket - LDB-PC-41-3- is a three-hole L-shaped plate fitting, which means it is often used to construct a support framework by joining two perpendicular strut channels. For much easier and quicker use of the angle bracket use channel nuts and hexagon head bolt. It's also possible to apply standard washers and hexagon nuts instead of slide channel nuts.

Tee angle bracket - LDB-PT-41-4- is a four-hole plate fitting, perfect for connecting the main mounting rail to a shorter rail section. Since the channel bracket has only one hole at each connection point, additional support is required. Tee angle bracket is best used to create 3-way cross-section of strut channels. Cross bracket - LDB-PK - is a five-hole flat fitting used to join four strut channels, one from each side. It is very useful for creating grid structures from the strut channel.

Corner bracket - LDB-PTRA-45-41-4 - is a four-hole trapezoid fitting is used for corner channel cross-sections, highly effective at constructing and bracing flat connections of mounting rails. Corner brackets allow You to connect two perpendicular strut channels at 45-degree angle to the main channel. The bracket is best used to join strut channel sections at a 90-degree angle.

L-shaped angle bracket -LDB-BE- is 90-degree channel fitting, available in three variants, each has a different number and configuration of holes: 1-1, 2-1, 2-2 and 1-3 hole pattern. 2-hole angle bracket LDB-BE-41-1-1 - is fitted with 1-1 hole pattern, one on each of legs. These channel brackets are used for light-duty mounting rail connections at 90-degree angle. For LDB-BE-41-1-1-R, creates T-joint configuration, while LDB-BE-1-1 bracket, is used for making butt-joint and L-shaped configurations. 4-hole angle bracket - LDB-BE-41-2-2 - is fitted with 2 x 2 holes on each leg for connecting mounting rails at 90-degree angle - both legs can bear a similar load.

Angle bracket (also known as delta bracket) - LDB-BTRA-41-3 - is a three-hole fitting used for a single-point joint of transverse strut channels. Two holes along the bracket's horizontal axis allow to apply it without a second support point.

Corner gusset bracket - LDB-PBTR-41 - is a 5-hole angular fitting used to create corner joints at heavy loads on each leg of the strut channels.

Winged bracket -LDB-AN-TL,-TR and -T - are used to simultaneously join mounting rails at multiple planes. It's a time-and space-saving solution, that additionally provides a highly professional and aesthetic finish of complex rail arrangements.

Z-bracket -LDB-Z - is a 3,4-hole angular fitting used for connecting intersecting STRUT channels. Depending on size, it may be used with 41x41mm and 41x21mm channels, or 2x 41x41 double channel. Z-brackets are applicable for light-duty joints.

This gives us a lot of freedom in designing the support structure for ventilation system, air conditioning, heating system and all other applications."

Beam clamps are used to joint strut channel to structural beam support. Windom beam clamps with bolt - LDB-B-O-CLAMP is available in 3 variants for 41x21mm, 41x41mm and 2x41x41mm channels. In order to fasten it, we need to slide the mounting rail into the clamp's "window" which is then bolted to the topside side of the beam flange. This solution provides quick and stable mount.

LDB-STP and LDB-PFIX feet are used to connect LDB STRUT suspension rails. Each model had two holes at the base to be fastened with screws or anchoring screws to the floor and one to 4 holes to connect the foot to the LDBST profile. LDB-STP-82-4-2 foot allows to connect two 41 profiles.

U - LDB-EXT-U type coupling is available in two sizes, for 41 and 21 STRUT rails. The coupling, apart from four holes used to connect the profile is also fitted with vertical walls which surround and reinforce the connection point - eliminating possible rotation.

LDB-WP connecting slide is the most basic component to be used for suspending LDB STRUT profiles from steel rails. It is very popular for structures with relatively low loads.

LDB-BAN-R2 movable coupling has two holes on each two arms and at the base. The arms are connected to the base by a bolt, which allows for smooth angle adjustment for connecting the STRUT profile. They are used wherever the framework design calls for atypical support connection, or an atypical profile angle.

Slide channel nuts are used to connect strut channels to the threaded rod. The indented part of the nut fits the indents on 41x41 and 41x21 mounting rails, allowing to move the component but at the same time prevent sliding. The middle hole is threaded to allow direct screwing in of the PG threaded rod.

SNL nut is the modified version of the SNP nut that has a similar application. The major new feature is the use of the steel spring dedicated for use with the 41 x 41 profile, which keeps the nut in place and prevents its sliding out during installation.  It is especially useful when multiple PG thread rod suspensions are to be made at a significant height. The SNKL version uses a shorter spring dedicated for the 41x21 rail.

Sound insulation channel lining is available in two sizes, one to match the width of the LDB fixing rail (GPK) and the second one to fit into LDBST strut channel (GPK-41). The channel lining is made of EPDM rubber, it is used to protect the ventilation ducts from building vibrations which may create noise inside the installation.

Cantilever arms are also known as wall supports or wall hanger brackets are manufactured of strut channel sections. Cantilever arms are anchored to the wall by means of elliptical holes which allow to fasten the support exactly at a 90-degree angle. They are used for supporting and mounting mount items directly on the building wall, like rectangular ducting, HVAC equipment, e.g. air conditioners, AHUs. We offer two main types of cantilever arms: WK-LDB and W-LDB (long cantilever support arms with additional bracing). , Wall support are available in lengths from 150 to 750 mm.

The available selection of installation components makes for a fully professional system. Thanks to the various fittings and multiple applications, they allow creating tailor-made structures, which perfectly match the individual features of a given installation.
A comprehensive selection of components, easy use and high workmanship quality mean that they can be used to suspend installation components in each and every interior without having to order custom angle brackets or complex connectors.
Strut support system, due to a comprehensive selection of available solutions allows for a quick and easy assembly of the steel structures and support frameworks.