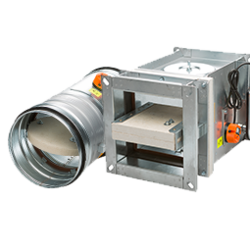 The main task of the smoke extraction systems is to remove hot gases and
smoke from the area covered by the fire in order to facilitate
the evacuation of people and to enable the extinguishing action and
the evacuation of people from the area at risk, while complying with
the criteria of fire and/or smoke tightness specified under conditions
of exposure to a temperature of 600°C.

The SMOKE system steel, single-compartment, round smoke extraction ducts, together with their components, are classified according to the PN-EN 13501-4+A1:2016 in E600 120 (ho) S1500 single fire resistance class,  and as non-combustible and non-fire spreading.

All male components of the SMOKE system smoke extraction ducts are equipped with GASK double lip seals for ventilation fittings made of EPDM and a 1.8 mm thick and 10 mm wide intumescent seal.